Grandma Friesen, 75, handily beat three young grandchildren this week in a rousing game of Plautdietsch Scrabble. The match, which lasted just thirty minutes before the youngsters quit in disgust, was the first time the respected matriarch was able to convince her offspring to “play the game in our mother tongue once.”

“Ach, I just don’t know what they’re teaching those kids in school these days,” said Grandma Friesen. “I had ‘Jreewe’ and ‘Feschlucke’ played before the kids could even think of ‘Oba.'”

Grandma Friesen ended the match with a score of 345, while her grandchildren could not even reach näajentich with all three scores put together yet.

“They kept trying to play English words and I just kept reminding them ‘it doesn’t give such’ in Plautdietsch,” explained Friesen.  “Those kids sure do know how to fetwiewle a woman yet.”

Friesen was adamant in her refusal to allow any consultation of Herman Rempel’s dictionary, insisting that the children “play the words they know.”

“That didn’t go very well, either,” said Friesen, “since all they know are the swear words.”

In order to even the score, the grandchildren plan to return next weekend and challenge their oma to a game of Scrabble using only hip-hop slang. 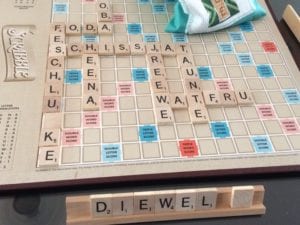 KITCHENER, ON During a homewrecking career that spanned more than six decades, local seductress Alice Kehler, 81, has been responsible for the break-up of a record thirty marriages in the Kitchener area. “I think I have […]

SWIFT CURRENT, SK Homeschool parents Edna and Harold Klassen of Swift Current are committed to providing their children with the highest level of education possible. Recently, the Klassens decided to cut back on math and […]

KITCHENER, ON Uncle Henry has been arrested and is being held in the local Mennonite church basement this week after being caught shooting from the top of five-point zone. “I’ve always wondered how he got […]