Facebook CEO Mark Zuckerberg announced Friday that he would be hiring Mrs. Edna Martens, 71, of Reinland, Manitoba and her nine spinster sisters to obtain as much information as they could on Facebook users. The information obtained by the instrusive Mennonite women will be used to help target advertising on the world’s largest social media network.

“After congress shut down our ability to track data electronically, we had no other choice but to access the treasure trove of data stored by the women of Reinland,” said Zuckerberg. “Originally we wanted to get Mrs. Bueckert and her crew from the EMC, but she was already under contract with Twitter, so Mrs. Martens was the next best thing.”

Mrs. Martens claims to have more than 80 gigs worth of information on every man, woman, and child in southern Manitoba, and has more than her fair share of info on Mennonites in other parts of the country as well.

“She uses cookies to collect her data,” said Zuckerberg. “Oh, sure, you can delete your search history and all that, but there aren’t many people alive who can resist one of Mrs. Martens’ ammonia cookies! I know I can’t!”

Zuckerberg claims he only has the best of intentions with Mrs. Martens’ data, and that is to make sure that every Facebook user is getting between three and five farmer sausage ads on their Facebook feed each day.

“Thanks to Mrs. Martens’ data we know who likes formavorscht and who prefers shinke fleish,” said Zuckerberg. “We can also tell if you’re more of a Papsi and a Ravel kind of girl or the type who devours pistachio pudding every chance you get. Mrs. Martens knows it all.” 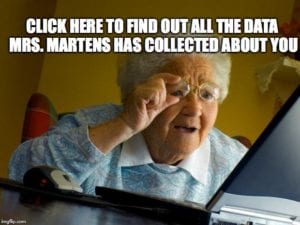 Find Out All the Data Nosy Mrs. Martens Has Collected About You
Quiz: Can You Tell an Oatmeal Raisin Cookie from a Chocolate Chip Cookie?

BLUMENORT, MB Parents across southeast Manitoba have been speaking nonstop Plautdietsch this December in order to keep Bethany and Ethan from finding out what they’re getting for Christmas. “It’s great, we can jerad and mulwoakjs all […]

NEW BOTHWELL, MB Area man Ernie Rempel, 47, had to reset his Apple ID password yet again this morning, after he went to purchase the Hientje Christmas album on iTunes and discovered he no longer […]

STRASBURG, PA The leadership at South Strasburg EMB passed a resolution this week banning the use of the Google Chrome web browser. Church members caught using Google Chrome will be forced to paint their computer […]